Mr R was exiting an inspection pit having been working on the underside of a van, when he struck his head on the valance to the van, causing a head injury which resulted in severe headaches, speech difficulties, disorientation, nausea, altered senses and thereafter psychological difficulties.

ASD pursued a claim against Mr R’s employers for, amongst other things, failing to provide suitable vehicle inspection lifts and failing to provide hard hats for use at work. Liability was immediately denied by Mr R’s employer’s insurance company. ASD instructed a local barrister who felt that there were less than reasonable prospects of Mr R’s claim succeeding. Regardless, ASD were not disheartened and issued Court proceedings against Mr R’s employers, seeking a split trial to deal with liability as a preliminary issue. Days before the trial the Defendant’s solicitors accepted primary liability for the accident and that the accident had caused some injury to Mr R. 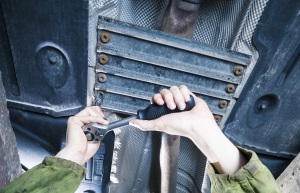 However, the extent of the injury was fiercely denied with the Defendant Solicitors suggesting that the impact caused nothing but a superficial head injury with headaches for a couple of days. As such medical evidence was obtained by ASD and the Defendant’s solicitors, which was contradictory. Regardless, ASD continued the fight on Mr R’s behalf with the intention of taking the matter to trial to let a judge decide on the Claimant’s accident related injuries.  ASD had no doubt that Mr R was genuine and had suffered significant injury as a result of the accident.

Yet again, shortly before that final trial, the defendant accepted an offer put forward on Mr R’s behalf by ASD, ensuring that Mr R received the correct compensation, which he deserved in light of the accident and injuries suffered.

*image for illustrative purposes only