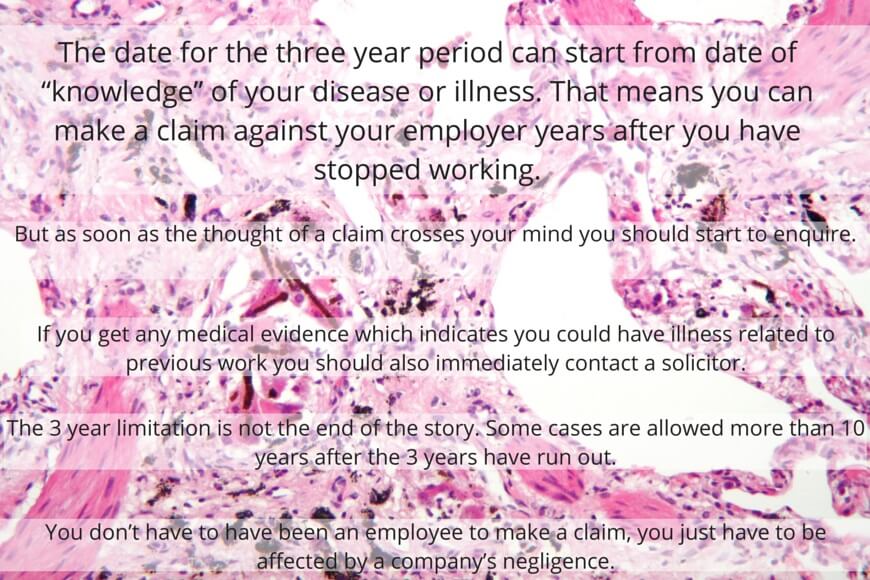 Sound confusing? We’ll walk you through the circumstances that effect the 3 year limitation period. The 3 year rule for bringing a claim does apply to industrial disease, but the legal tests and statutory framework are a little more complicated than in straight-forward accident claims. This article will explain what you need to know in layman’s terms.

What is the 3 year limitation?

The 3 year limitation period means that you must bring your claim within three years of your accident. But, since a lot of diseases don’t magically start on a specific day there are two dates that can be used to start the stopwatch on the three years:

With industrial disease the date of the cause of action has long gone, or was over a period of time. e.g. a person who was exposed to asbestos every day at work, forty years ago. This does not mean you cannot make a claim. In this instance your 3 year limitation will start from the date of knowledge. The 3 year period is often referred with the phrase “time has started to run”.

What is the date of knowledge?

Generally the date of knowledge is when you first knew that your injury:

So, with a claim for deafness you will have known during the time of work where the loud noise came from – your workplace. You will also have known who the defendant should probably be; your employer at the time who controlled the workplace. But this doesnt mean that your date of knowledge is when you were employed or even when you first had some hearing loss.

If the hearing loss wasn’t any trouble or significant until recently, perhaps because as the years passed it has combined with hearing loss caused by ageing, you will not have known you had any claim at all, let alone one which was worthwhile bringing. In this situation, time will not have started to run and your date of knowledge will be much later.

Can the court argue that I “should have known?

In some circumstances, yes, but this is entirely dependent on the facts of each specific case.

A date of knowledge can be fixed if you had the resources to acquire knowledge – so you had observed evidence or you could have reasonably found evidence with medical or expert advice, and it is considered reasonable that you should have sought it.

Again, deciding this is unique to each particular case, but let’s run through some examples to give you an idea of scenarios.

Let’s take the example of shortness of breath:

Scenario One: Shortness of breath develops and you don’t go to your GP

Scenario Two: shortness of breath develops – you do go to your GP, but do not receive a diagnosis relating to industrial disease

Scenario Three: You return to your GP and they advise you see a specialist about industrial disease

Knowledge is not always medical

The relevant expert assistance you ought reasonably to have obtained is not limited to medical expertise. You may be fixed with knowledge of facts if you reasonably have been expected to obtain it from other experts, for example by instructing lawyers.

Whether it is reasonable will depend on the circumstances – although the fact you are reading this web-page may indicate you have already reached the point where instructing a lawyer is a reasonable thing to expect of you or whoever you know that may be suffering!

I’m not sure I’ve got a claim at all. Can time start to run?

Yes, it can. The limitation period may well have started and finished! All you need to know for time to start running is the essence of the facts about which you are complaining. You may be completely ignorant about whether those acts are wrongful or not. But read on.

What if I think the 3 years has already passed? Am I too late?

All is not lost. A solicitor can help you first to decide if the 3 years has passed and even if it has, we can still try to persuade a judge that it is ‘equitable’ to allow your claim to proceed.

The court has a discretion and will take into account all of the circumstances of a case. Some cases are allowed more than 10 years after the 3 years has run out; and others are not allowed when only a few months have passed.

Every case is different – the reasons for any delay and the acts or omissions of both parties can be very important and have to be balanced. It should be stressed that every case is unique and all the circumstances are taken into account in the balancing exercise. For example, the court is less likely to favour a claimant who has no good reason for delay in starting proceedings or to favour a defendant (the person you are claiming against) who has been obstructive in answering legitimate enquiries.

The takeaway point? Once you think you may have a claim, you should act promptly.

How can a solicitor help me?

Disease cases require careful preparation, especially when it comes to considering limitation periods. We will help you to:

Why is the limit set at three years?

It’s considered in everyone’s interests to bring claims promptly. Evidence from witnesses is more likely to be readily available and fresh, compensation can be paid sooner and potential defendants are not forever looking over their shoulder. So, legislation has set a statutory framework for preventing claims being brought too late.

What illnesses count as industrial disease?

Different workplaces and industries give rise to different risks. Some of those risks can give rise to immediate and obvious injury, for example broken bones caused by heavy equipment. However, disease is “insidious”, slowly and inconspicuously creeping up on the sufferer but causing serious harmful effects, perhaps not noticed until it is too late to prevent really serious injury and even death.

Disease is usually caused by exposure to a risk over a significant period of time. Typical examples of such disease are:

Take note that this is not a definitive list.

Do I have to have been employed to make a disease claim?

No. Most claimants with industrial disease will have been employed in an industry, but others may have just been visiting industrial premises from time to time or even may have been exposed to danger just by living with a partner who worked in a dangerous industry.

For example, we have pursued a successful claim for a woman who washed the clothes of her family which had been covered in asbestos. This means she was just as exposed to the dust and developed an asbestos disease.